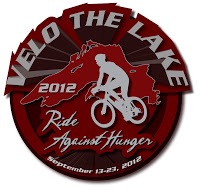 Welcome to the official blog of Velo the Lake 2012 — Ride Against Hunger.  This will be the running, rambling, rumbling, and sometimes bumbling account of my 1050-mile, 10 1/2-day circumvelocipedation (you know — to bicycle around something — and yes, I think I just coined the term) of Lake Superior. The bike ride itself will run from September 13th-23rd, 2012, but the greater odyssey has already begun with thousands of miles on the bike, planning out a route, finding a diet that works, and failing miserably to effectively counter the argument that I must be crazy.  Many have been the long rides in the dark of early morning, much the pain of an aching bum (take heart ye would-be endurance cyclists — it comes and goes in phases), and great the joy from the occasional “magic cow” come to make my way easier.  More about magic cows later, but they are moments when suddenly all the work of riding a bike a long way is more than worthwhile, because something happens that makes just being there at that moment joyful.

Now I would like to forewarn you that this blog will spend a lot of time in my head, but that I also have a greater purpose in this circumvelocipedation.  This is to raise some money for Second Harvest Northern Lakes Food Bank.  What a fine thing they do in serving the needs of the hungry in our NE Minnesota – NW Wisconsin region.  Your donation to them will help more people than you might imagine, and I will shortly be telling you more about them and their work, and providing you with the means to help me support them…  Later, friends!