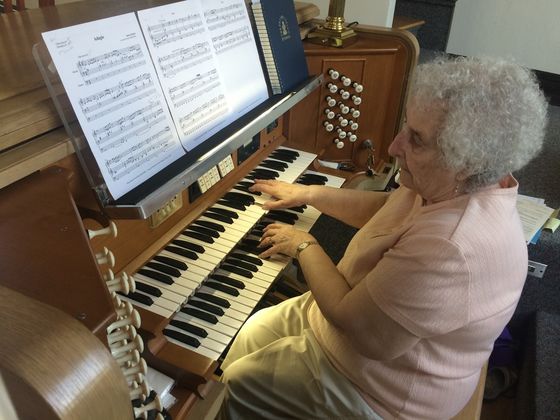 Seated at the console of the beloved pipe organ she has played for more than six decades, Marge Stillwell paused for moment and reflected back. Her mind rolled through the catalogues of favorite music and fondest memories of past concerts and services, choir directors and organ instructors who had helped her along the way.

Stillwell, aged 87, has served as Organist for the Presbyterian Church of Cloquet for the past 63 years. She was 24 when she started to play the pipe organ, and this organ was the instrument that she learned to play on.

Growing up in Blackduck, Minnesota (northeast of Bemidji) she had learned how to play the piano as a child. As a young woman Stillwell moved to Cloquet when she married, but had no idea of what was to come when she attended a holiday service at the Presbyterian Church.

Stillwell recalled the story: “I remember coming on a Christmas Eve and sitting in the balcony. The organist was so good, and I was thinking, ‘I’m so glad I am not the organist.’ One year later I was sitting there wondering, ‘What happened?’”

She explained how shortly after that service, when the church needed a new organist, “The minister came to me — and I didn’t even know how he knew me — and asked if I would learn to play. He said ‘we’ll pay for your lessons, we’ll pay for your music, and we’ll give you a salary.’”

The learning curve was daunting. Playing a pipe organ is not like playing the piano, and not even much like playing an electronic organ.

“Someone who plays the keyboard cannot play the <pipe> organ without many years of lessons,” Stillwell said.

She was no exception to this, and in her case that meant years of study and practice.

“I started out knowing nothing, except what the woman that first taught me for a little while could teach.” She recalled that, “I knew enough to know where to put my hands, but I really didn’t know how to play.”

“Then I studied with another fellow who taught me quite a bit more, and I thought that I was doing pretty well.”

But when her organ instructor left Cloquet, Stillwell felt there was yet more to learn.

“So, I went to Lucille Webb who was at UWS,” Stillwell remembered. “She had studied in France with some of the greatest French organists. She had a certain method, and that’s what I learned.”

Beginning to study under Webb, Stillwell was in for a shock: “She told me, ‘You are now starting over.’ And I did — I had to completely start over.”

Webb became Stillwell’s most exacting teacher, and Stillwell’s abilities began to shine under her tutelage.

The pipe organ installed at the Presbyterian Church of Cloquet is still largely the same instrument that Stillwell began learning to play on 63 years ago. But she is quick to differentiate between the instrument– typified by the exposed pipes above the altar in the chapel (and the equipment that feeds air to those pipes) – and the console– the complex set of keys, pedals, draw knobs and presets – that she sits at to play the instrument.

While the instrument is still mostly the original Kimball organ installed in the church in 1928, the console, which was also originally a Kimball, was rebuilt in 1962.

How that came to pass is a story Stillwell remembers quite well.

“We had a member in the choir who had studied organ,” she said, “and he travelled all over. Everywhere he went in the world he managed to get in and try the organs, so he knew the sounds he liked. Then, when they rebuilt the console, he worked with the builder. So, it’s a well-balanced instrument,” she said with notable pride.

The chapel of the Presbyterian Church is also an important part of both the instrument and the choral music it often accompanies.

When asked about some of her fondest memories over the 63 years she has played the organ at the church, a series of programs presented with the church choir years ago came to mind.

Stillwell remembered, “We did some cantatas, and one of them was the Faure Requiem, which we did twice. The first time we did it, when we finished, we all went down to the choir room and cried. It was gorgeous. I think that was the most memorable.”

But she is equally enthused about what is happening now with music at the church.

“Jim Sheetz is now our choir director, and he has done some really great things, combining our choir with Zion Lutheran, because he is also the choir director there. So, we’ve had a good time together and they’re going to be part of this concert coming up <on June 20>,” she said.

Stillwell was honored about three years ago, when the American Guild of Organists (AGO) came to Duluth to play and show off local pipe organs. She had been playing for 60 years at that time, and the AGO performed a concert at the Sacred Heart Music Center in her honor.

Beyond the recognition, for many people just watching her play can be a memorable experience. As feet dance effortlessly across the pedals, left and right hands move independently on the upper and lower manuals (keyboards).

Stillwell described this saying, “Many of the pieces that you play, your right hand is doing one melody, your left hand is doing another, and your feet are playing another one. Sometimes the melody is in the feet. It’s fun.”

Special “organ shoes” allow Stillwell’s feet to work their magic. She has had to send away for those, going through a pair every six or seven years.

On a recent Tuesday afternoon, as she has for the last three years or so, Stillwell took her eight-year-old Maltese, Heather, to the Sunnyside Health Care Center in Cloquet. There the skilled veteran of the pipe organ played an electronic piano for the residents during their Tuesday afternoon church service. After the service Heather was taken around to each resident for a bit of hands-on pet therapy.

Heather may have been the highlight for the residents, but the happiness that Stillwell felt in performing this act of kindness was evident on her face.

People often express to her how much joy they get from her music, she remarked. She added that there is a lot of joy in her own life, saying, “There’s no time to not be joyful.”

Marge Stillwell seems to be all about the music, and the joy it brings.

“Music is what keeps me going. I love every bit of it that I’m doing. Whether it’s a band, or organ solo, or accompanying, I love it all.”

0 comments on “After 63 years, Marge Stillwell still loves to play the pipes”