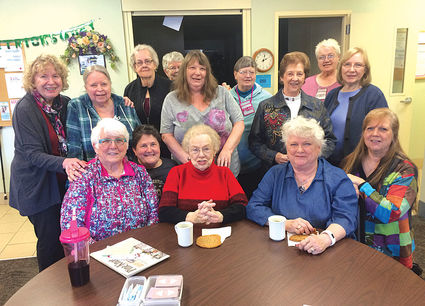 When 100-year-old Mildred Kjoberg got together with a few of her friends and relatives at the Cloquet Senior Center on a recent Tuesday afternoon, the only thing flying faster than the playing cards was the friendly banter.

Kjoberg, or just “Milly” to her friends, gave it back as well as she took it, and the result was a whole lot of laughter and fun for all. “You can see why we enjoy coming here,” she chuckled.

Indeed, Kjoberg seems content wherever she is, and with whatever life may send her way.

Teamed up with Sandy Brademan in a game of “Hand and Foot,” Kjoberg took on her niece, Kathy Jenski, who was partnered with Gloria Berger. Having passed some bad cards on to her niece, Kjoberg teased her: “Why don’t you go out?” When Jenski replied “I can’t,” the centenarian pressed the issue, asking “What’s the matter with you?!?” Her niece dug back, “There’s some old lady that’s over 100 gave me two red threes, and I can’t go out… I guess I told her!” Laughter then came from all around the table.

When Kjoberg herself “went out,” winning the hand, Jenski playfully threatened, “You might be walking home!” Berger then chimed in, stating that she’d still give Milly a ride home. “See? I’ve got somebody,” Kjoberg declared triumphantly. More laughter all around.

Berger went on to say, “Everybody was babying her until I got here, and I decided to pick on her. She likes it.” Kjoberg responded with, “She’s been mean to me ever since I met her.” Still more laughter.

Later (out of earshot) she confided, “They have been extremely nice to me…”

When asked if she knew how to play Hand and Foot before coming to the Senior Center three years ago, Kjoberg brought out a little self-deprecating humor. She answered, “No, and I still don’t know how,” a line which, of course, struck funny bones all around.

At her well-kept home in Cloquet, she talked about her life of 100 years. Just three months before she was born, the fires of 1918 nearly ended her story before it began.

“My parents were up at Brookston. They tell me that’s where the fire started,” she said.

Kjoberg shared the story of how her pregnant mother and two older brothers hid all night long in a culvert under the railroad tracks to escape the fire. The next morning her father rushed home from work, taking a trolley from Duluth and finding his little family waiting by the tracks. The joyous reunion was recounted to her by her mother, Hulda.

Sadly, just weeks after the fire, her father became ill and passed away, lost to the Spanish Influenza epidemic that swept the nation in 1918.

After these tragedies, Kjoberg’s mother made ends meet by doing domestic cleaning work, and was aided by the help of friends and relatives. Her dad had a half-brother in Brookston who helped out a lot.

“Brookston was a little up and coming community at that time with a hotel, a pool hall (which us girls weren’t allowed to go into), two grocery stores, an ice cream shop, a post office, telephone office, and a barber shop,” Kjoberg said. “We never had a car, but we didn’t have that far to go to get our groceries and things.”

Seventeen years later Kjoberg’s mother finally received some compensation for her losses in the fire, enabling her to take a trip back to Sweden in 1936.

“The year my mother went to Sweden, we rode the Greyhound bus to New York,” she said. “I was 17 and a friend took me to the Hambletonian horse races. I went to Madison Square Garden for dance contests, and to a Broadway play. You could get a sandwich under glass!”

Kjoberg reflected on her life after returning from New York. “I graduated in the first graduating class from Brookston. Now the school is gone,” she said. She talked about her older brother who served in the Civilian Conservation Corps during the Depression, and about her early career. “After graduating from State Teachers College, I taught grades 1-8 for three years in a one room schoolhouse. That was up in Aitkin.”

Kjoberg also worked for 32 years in the Register of Deeds Office in Duluth, driving to and from work on “Old 61” each day for many of those years.

She met her future husband, Harold, before the war and married him after he returned from it. He had circled the entire globe while in the service during World War II. Together, they continued to travel, visiting Europe “six or seven times,” and China. They drove their motorhome all over the West, adventurously taking it up the ALCAN Highway to Alaska.

An easy conversationalist, Kjoberg seems to find herself at home wherever she goes: “When we drove up to Alaska, my husband wanted to go fishing, but I didn’t go,” she said. “I started talking with our hostess, who was also from Minnesota. She was called ‘the Eagle Lady’ because she would go out and pick up roadkill and feed it to the eagles. She asked where I had taught, and when I told her Aitkin, she asked if I knew the Voss family. Of course, I did, so it’s a small world.”

Asked about the things in life that seem to keep her so happy, she responded, “I take care of my house and go to Tuesday recreation. I do all the housekeeping myself. It’s good exercise for me. I think about the good times, the funny times. I’m satisfied with what I have here. I’m not going to ask for anything more. What would I do with it?”

Back at the Senior Center, the card players took a short break. Niece Jenski brought fruit to share. “So everybody goes bananas,” ribbed the 100-year-old Kjoberg.

Berger summed up the interview by saying of her friend, “She deserves recognition. Tell the world about her. Prepare them!”

As for advice, the veteran of 10 decades simply offered: “Just enjoy what you have and do not strive for something more. I’m happy the way I am.”